A Sailfish Record- An anglers perspective20 October 2017Next

Whilst the stars were still shining bright in the night sky, Captain Chad had Blue Lightning slipping out of the Montebello Islands and heading out wide. Jason Taylor’s Innovative Sportsfishing group were down in their bunks dreaming of their previous days fishing success and why not? It would be a few hours before the suns first rays would grace the horizon and the Sailfish would turn on a spectacle that would not just leave the guys weary & weak at the knees but give them fodder to dream about for years to come.

Our first inkling of action came when we saw a Marlin feeding on the surface. The guys were primed ready.  We were certain it would only be a moment before it’s focus would shift to our lures. It wasn’t to be.  Whatever it was feeding on held its attention so Blue Lightning steamed on.

As Captain Chad brought us to our destination the teasers were in and the guys, and crew, waited in anticipation.  Almost on cue, we had Sailfish come up in the spread and the guys were straight on to switch baiting.  Within moments, Dave and Mick had a double hook up of Sailfish. As if to get everyone’s attention & let us know they weren’t going to make life easy, Mick’s Sailfish made a run towards the bow of the boat.  Mick was too hungry to let this fish go. He’d been chasing his first Sailfish for over twenty years & there was no way this one was getting away. As Mick navigated his way forward & disappeared through the clears in hot pursuit of his fish Dave got on with landing his first ever Sailfish in the traditional location, on the back deck. Mick, having battled his wayward Sail & with the help of Captain Chad’s skippering expertise, managed to coax his fish to the back of the boat, and within no time he’d landed his first ever Sailfish as well.

The guys were ecstatic with Mick & Dave’s results & after the customary team high fives all ‘round the boys were poised ready. The Sails, however, were not going to be taken for granted & they made the guys wait.  The anticipation was palpable but the frustration was mounting. It was suggested we headed off to do some jigging. When faced with the two options the consensus was that the boys would rather keep trying for billies.  They had a variety of tackle that needed trialling & they weren’t going to give in that easily.  Turned out it was the best decision they could have made.

Leah decided it was the perfect time for lunch & advised the guys that they’d best make the most of the lull to build up their energy reserves as you can always guarantee that when everyone is eating lunch mayhem erupts on the boat.  Sure enough, as Leah served the last of her scrumptious burgers up and the guys tucked in, Captain Chad yelled ‘Fish up!’ and everyone scrambled into position.  People were running in all different directions grabbing rods or cameras. It was a well organised chaos!

3 Sailfish were hooked & the hearts of Julian, Simon and Gary were certainly pumping as they landed a Sailfish each resulting in Julian & Simon’s first ever Billfish (Sailfish). From that point on, the day turned it on like you wouldn’t believe. Having landed a Sailfish for each member who hadn’t yet had the thrill, it was time for the rest of the gang to have a work out. It was certainly ‘game on!’

We had double hook ups, triples, four ways, five, sixes and even seven way hookups. The deck looked like a knitting machine with rods and anglers, leaderers and photographers weaving amongst each other to effectively avoid any tangles. Captain Chad & Leah kept Blue Lightning angled perfectly to the nearest fish to enable the guys to successfully land Sailfish after Sailfish. The crew were like a well oiled machine as the Sails came thick and fast. The experience was such that it was nothing to have 5-7 anglers on and everyone still take a moment to enjoy the display of several free jumpers out the back of the lines.  It seemed that each time the Sailfish appeared to be at their most brilliant, the fish found a way to increase the already sensational spectacle.

With countless Sailfish raised, 55 hook ups and 39 captured the day had unfolded into what had become a day all of us can now claim as our best day’s fishing yet and one we’ll all remember.

Jason was pretty happy with himself catching a Sailfish on stickbait not once but twice. Damo B, and Dave caught a Sailfish each on plastic to mix things up. Mick caught one of his Sailfish on a hookless lure which was also a first for Blue Lightning.

What a day to remember!!

Thanks to the beautiful Audi for her assistance with this week’s blog!! Don’t miss the pics below!

NB: All Sailfish were caught and released Jason Taylor’s Innovative Sportsfishing Group had the following to say:

Simon: “Without a doubt the best day’s fishing I’ve ever had.”

Mick: “First fish over the last 20 years.  I’ve been trying to get a sailfish & have lost a few over the years & never landed one. I thought it would never happen.  It’s the pinnacle for me. Can’t thank the crew enough.  Good to be involved in the team work. It was quite overwhelming and emotional.”

Steve: “One of the greatest days I’ve ever had.  You think you know it all ’til you have a day like this. A day in paradise.”

Dave: “I’d like to thank the crew.  It was an awesome day. One of the best days of my life as well. I think Sam (Blue Lightning’s deckie) is beyond his years in his knowledge.”

Jason: “Amazing to be part of an awesome day. To catch Sailfish on a stick bait is the ultimate. Can’t thank the team and everyone involved for an amazing day.  A day we will never forget.”

Jules: “Best fishing. Always thought one day I may catch one. I never thought I’d catch 3 in one day!”

Gary: “Crew, thanks heaps. Good to see Mick get that voodoo off his back. The last Sailfish I caught was on my own gear. Epic. Best days fishing I’ve ever had.”

Damo B: “To have switch baited Sailfish, using plastics and stickbaits was awesome.”

Audi: “I didn’t expect to be on the rod at all today so I can’t thank the guys enough for the unexpected pleasure. It was a privilege to be a part of the record breaking team & with such a great group of individuals made it extra special.”

Leah: “Thank you for letting me go on the rod. Having you guys sa a part of breaking that record is very special, and I feel so lucky to be a part of one amazing day.”

Chad: “Thank you to everyone. To have done it with such a great team was really special. We look forward to breaking the record again next year.”

With over 3,000 photos from this week’s charter. Don’t forget  to follow Blue Lightning Charters on social media: 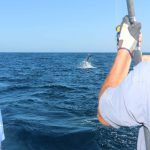 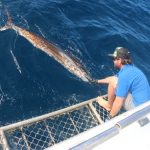 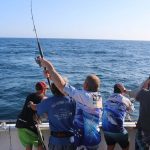 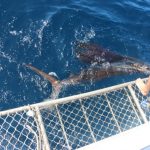 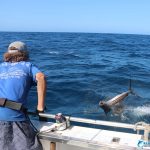 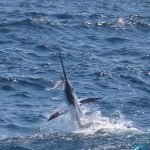 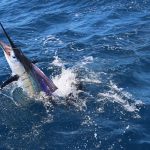 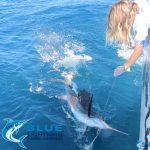 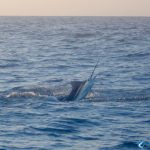 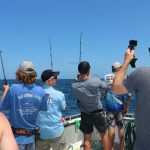