A mixed bag at the Montebello Islands

A mixed bag at the Montebello Islands

We are already over four months into our Montebello Islands fishing season! Time definitely flies when you’re fishing in paradise on a daily basis. This week we welcomed a crew organized by Ben from Compleat Angler Nedlands for a 7 day charter. John was lucky enough to be surprised his father in law with the trip and only told him the night before they left for the charter. To say he was stoked by the surprise would be an understatement.

We were all slightly disappointed to wake on day 1 to 15kn S winds, particularly after being spoilt with no wind and amazing weather for the last week. To kick off the charter we had a trolling session as we made our way across. The crew caught a mix of Shark Mackerel and Spanish Mackerel. For our next session the boys decided on a jigging and plastics session. Ben was happy to kick off his tally for the trip with a nice sized Coral Trout. Darren was next up with a Coral Trout of his own, before John reeled in a Rankin Cod. Les used a jig for the first time and caught himself a nice Rankin Cod and the classic first timers smile. Connor was sporting a similar smile after catching his first ever Mack Tuna on a jig. The bottom fishing was a bit quiet by Montebello Islands standards, I think even the fish were a bit scared of the wind. The crew did manage to get some nice fish though. For the final session before we arrived at the Blue Lightning pontoon the crew decided to troll hard body lures. The crew caught Shark Mackerel, Mack Tuna & even some Spanish Mackerel to top off day 1 of their Montebello Islands fishing adventure. For the Blue Lightning crew we were happy to be home at the incredible Montebello Islands.

Wow, we woke on day 2 to a windy day, with winds blowing 28+KN E. It made for a great day for fishing around the islands and on shore. Unfortunately, the wind seemed to scare off the fish. The crew managed to hook a few but didn’t land too many. It was still a nice day to explore the islands. The islands provide some beautiful and unique landscapes and even without fishing are a breathtaking place to explore. The boys did manage to score themselves a few squid for entrée, which we were all lucky enough to enjoy after a tough day of fishing.

We woke on day 3 and were immediately relieved to see the weather was much more promising. We gathered the crew and made our way out to make the most of this promising weather. To kick off the day the boys had a hot session on Spanish Mackerel. Our luck had changed, and the whole crew couldn’t be happier. Connor was a particularly happy fisherman catching his first ever Spanish Mackerel.

Next up was a bottom session using plastics and jigs. Our luck really had changed with the crew reeling in a range of species including Rankin Cod, Chinaman and Coral Trout. The crew were ready to move on and so we trolled some lures. It wasn’t long before something hit the lure, unfortunately none of us saw what it was and so the waiting game continued. Soon, that exciting sound and the line went peeling off. After a fun little battle Darren managed to catch himself a Wahoo. Next up was Ben, a line went peeling off and he was on it! His trusty Richter Soft Grassy helped him reel in a good sized Sailfish!!! The vibe on board was electric with an excited crew hoping to see and catch more game fish. The crew got their wish as another reel went peeling off!!! This time it was Les who caught another Sailfish this time on a Pirate Skirted lure. It was a great end to a sensational day at the Montebello Islands, we were so relieved that these incredible islands had decided to show what they are made of J

We woke on day 4 to yet another windy day! While we were all disappointed we decided to make the most of the Blue Lightning fleet and head out for a day on board Global Venture. For the first session of the day we decided on casting and popping. The crew had a few follows from GT’s but unfortunately no hook ups. They did manage to catch some sweet Gold Spot Trevally and Golden Trevally on plastics which made the session a lot more fun. Next up we changed location for a fresh casting session. Before we knew it we had Mackerel launching at the lures, there were smiles all around. Next up was a BIG GT, it hooked a lure but unfortunately threw the hook before we were able to reel it in. It was time for lunch so we headed back to the Cod Cave for a bite to eat and to stretch our legs after a big morning of fishing.

After lunch we headed back out on Global Venture for the afternoon session. Les was a happy fisherman catching his first ever fish on a soft plastic, a  Maroon Sea Perch. Chris was next up catching himself a Chinaman on a Soft Plastic. It was a good light tackle session with the crew catching a nice variety of Montebello Islands fish species from Charlie Courts to Spangled Emperor to round out the day.

As daybreak came on day 5 we were elated to see what a beautiful day we had ahead of us. We finally had the chance to really show the guys this amazing place in her full glory. First up was bottom session using jigs and plastics. It was a great session with a number of firsts. Noel scored his 1st ever Red Sea Bass. Soon after Connor landed his 1st Coral Trout. The Monties were really showcasing their beauty to the crew now! It didn’t take long for Les to admit he was converted to jigs and soft plastics, he was absolutely loving using them so far. Anthony was next up scoring himself an Amber Jack. Soon it was Connor’s turn, catching his 1st ever Coronation Trout. The crew finished this great session with Long Nose Emperor, Rankin Cod, Coral Trout, Coronation Trout, Spangled Emperor and Crimson Sea Perch. To top off a great day of fishing we were once again treated to stunning show from plenty of whales. The whales have been breathtaking this year, showcasing their size and beauty on most of our trips so far. It’s something you never become complacent about though, we are still in awe of them each and every week.

In anticipation of some incredible weather and to go with the tides we made an early start on day 6. It really was a beautiful start to the day with not a breath of wind. We decided to spend the start of the day bottom fishing and what hot sessions we had. The fish were definitely hungry with the crew scoring plenty of fish from Rankin Cod to Maroon Sea Perch, Chinaman to Robinson Sea Bream and of course Coral Trout. It was a fun day with plenty of action! On one of the drops the guys had not one, but two handles break while they were on a fish. It made for some great entertainment for the crew! The crew were keen to try their hand at trolling and casting with the water so clear and blue, conditions were perfect. We could even see the Wahoo and Spanish Mackerel swimming around the boat. Unfortunately, the Wahoo didn’t want to play the game, however the Spanish Mackerel did, which made for plenty of fun.

Next up the crew decided to troll some lures. It wasn’t long before all our prayers were answered, the line went peeling off. John was up on the rod and after an electric battle he scored his first ever Billfish, a Black Marlin. His reaction was classic and the excitement was contagious with the Blue Lightning team smiling from ear to ear. John was very quickly “hooked” on billfishing. The crew headed back to the Cod Cave (Blue Lightning’s pontoon) for some relaxing time before dinner. The guys even went for a swim as it was so warm, and had a nice relax to finish off another beautiful day at the incredible Montebello Islands.

Day 7 was a great way to finish of this crew’s Montebello Islands charter with some more beautiful weather. First up the crew decided on a casting and popping session. Anthony was absolutely stoked to catch his first ever GT. Giant Trevally are always a prized fish by the crew as they put up such an epic battle, it is a huge achievement to reel one in. It was a fun session with Les and Mark scoring a Spanish Mackerel each. The Mackerel were going absolutely crazy, jumping out of the water and putting on a sensational show for the crew.

Anthony took advantage of the situation scoring himself a massive Spanish Mackerel, his personal best weighing in at 20+kg. Next it was Connor’s turn, reeling in his biggest ever fish, another Spanish Mackerel weighing in excess of 20kg! The fish were proving very hungry as we made our way back towards Dampier.

The start of this trip was very windy and the fish were quiet at times. Lucky for this crew Blue Lightning’s extensive knowledge of this area paid off. The guys managed to catch Black Marlin, Sailfish, Wahoo, Spanish Mackerel, GT, and plenty of bottom fish species. 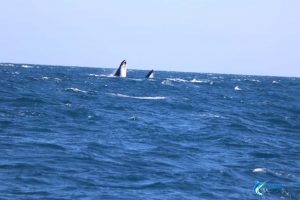 Whales putting on a show for the Blue Lightning crew 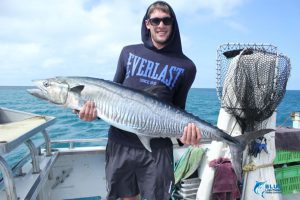 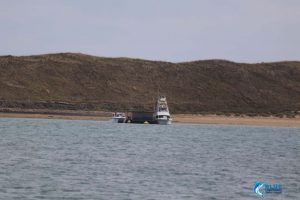 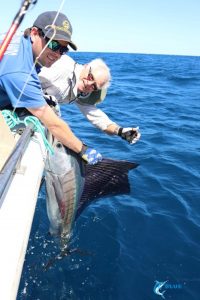 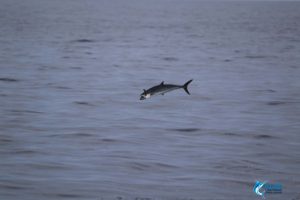 A Mackerel taking flight at the Montebello Islands this week 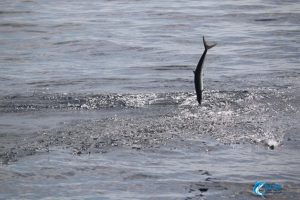 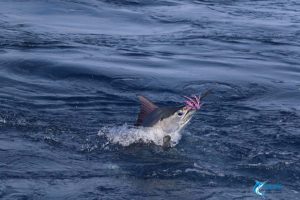 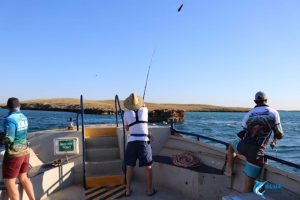 Casting and Popping onboard Global Venture 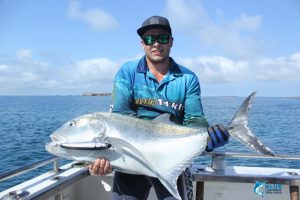 Anthony with his first ever GT 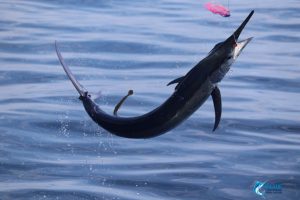 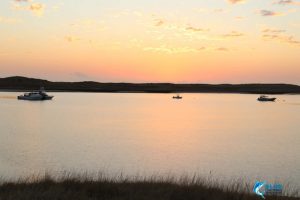 All our babies at the Montebello Islands for a beautiful sunset 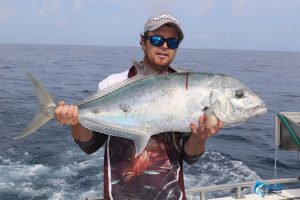 John with a Trevally 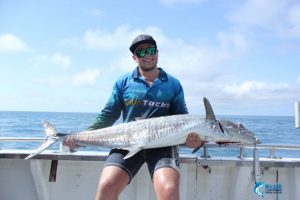 Anthony with a big Spanish Mackerel at the Montebello Islands 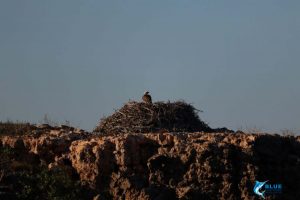 An Eagle at the incredible Montebello Islands 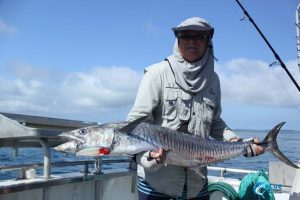 Les with a Spanish Mackerel 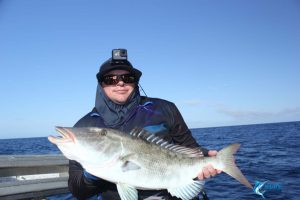 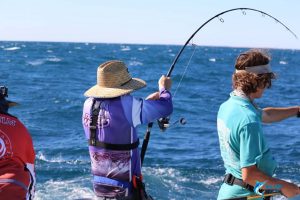 Hooked up at the Montebello Islands 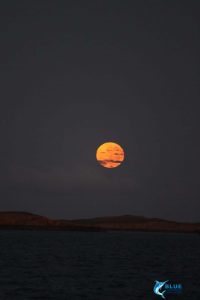 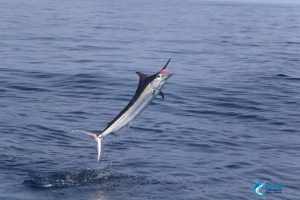 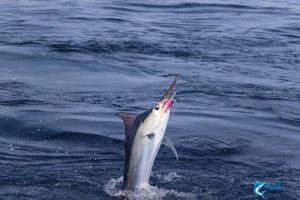 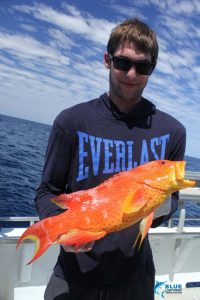 Connor with a Coronation Trout