Sportsfishing and Billfishing Fun at the Montebello Islands23 August 2018

Personal bests a plenty at the Montebello Islands

The other week we had a hectic week onboard Blue Lightning Charters with two charters running in sync. The first charter was one of our classic Montebello Islands fishing charters with a group of friends who flew all the way from Sydney NSW. The second charter will have it’s own blog an adventure charter featuring stand up paddle boarding, surfing and exploration of the incredible Montebello Islands.

Day 1- Mackerel Madness at the Monties

We started this charter a little late after the crew’s flight was delayed, once the crew were assembled we were aboard Blue Lightning and headed towards the incredible Montebello Islands. We kicked off the charter with a normally great little Spanish Mackerel fishing spot, it was a little quiet today so we moved on. Next up it was time for the crew to try their hand at some bottom fishing, it turned out to be a great session with the crew catching Coral Trout, Rankin Cod, and some big Trevally including Gold Spot Trevally. Once the crew had their fill of bottom fishing we moved to another of Captain Chad’s prized Spanish Mackerel spots. This one was perfect and we had a crazy session! The crew managed a triple hook up to really get the blood racing and wet their appetites for aa great week at the Montebello Islands. Before long the crew decided to break out the Poppers and Stick Baits. Moose scored the biggest fish of the session a 24kg on a Green Popper by Angel Tackle. The crew managed to score three fish over 20kg with the rest of the fish weighing in at over 15kg! It was a seriously great fishing session.

This session was plenty of fun for the whole crew with:

It was a great first day at the Montebello Islands for the crew and they were excited to see what the remainder of the week would bring.

Day 2- The winds are here

We woke on day 2 of this charter to a windy day at the Montebello Islands. The crew used the morning to enjoy the Blue Lightning Charters pontoon and have some downtime and rest in an idyllic location. We decided to have an early lunch and then head out after the winds have subsided. As usual the Blue Lightning crew delivered the goods with some fun fishing and of course a couple of personal bests for the crew. On day 2 the crew scored Rankin Cod, Chinaman, Spangled Emperor and Coral Trout. Mick was stoked to score his personal best Chinaman while Justin added Rankin Cod, Coral Trout and Chinaman to his list of species caught. It’s these firsts and personal bests that Chad and I love being a part of, the moments anglers will talk about for years to come.

We woke on day 3 with a sigh of relief as the weather was proving a little kinder. After a big breakfast we made a longer journey than the weather had allowed on day 2. First up was bottom fishing, the Coral Trout were very hungry with the crew reeling in quite a few. The session also reeled in Maroon Sea Perch, Red Emperor, Spangled Emperor, Rankin Cod and Scarlett Sea Perch, giving the crew a great insight into the incredible species on offer here at the Montebello Islands. The firsts and PB’s for this crew were coming in thick and fast including:

Day 4 was upon us and it was time for this crew to try their hand at Billfishing. This season has proven to be one of our best billfishing seasons to date with Sailfish in particular appearing earlier and in larger numbers than we have seen in recent years. Ryan was first up catching and releasing  Black Marlin on a Qantas Halco hard body lure to really kickstart the excitement and heart rates of the whole crew. It wasn’t long though before all our hearts were nearly beating out of our chests. Mick, Andrew & Luke were on a three way hookup, they all successfully caught and released their first Sailfish in a flurry of activity. For Luke it was extra special as it was also his first Billfish, want an incredible Montebello Islands fishing memory he created! Next up was Nathan scoring his first Sailfish before he and Jacko were onto a Wahoo each. The Montebello Islands weren’t done with us yet though, in fact they were just getting started! Next up was another three way hook up with Mick scoring a Sailfish on a stickbait. Then Moose & Justin landed their first Sailfish, it was chaos on the deck with everyone helping out however they could! Jacko was next up scoring a nice Yellow Fin Tuna before Flopp got his first Wahoo. Before long it was Jacko’s turn to catch and release his first Sailfish with a massive grin of pride at his catch. The final hookup of the day was another three way hook up with Flopp, Andrew & Jacko scoring at Sailfish each leaving our total for the day at 11 Sailfish and 1 Black Marlin. The whole crew were stoked to have been a part of such an incredible day of Billfishing, Captain Chad was even more stoked to be able to share his passion for billifish with this crew in such a fun and entertaining session

After the excitement and entertainment of our billfishing on day 4 my notes are a little short.  The crew had some fun bottom fishing on day 5 catching an array of fun and delicious Montebello Islands fish species. For day 6 they decided to utilise the Blue Lightning Charters fleet to the max and spent the day on board Heart Starter. She got them in nice and close to the islands allowing them to fish and explore this unique part of the world in the best way we know. Before we knew it day 7 was upon us and the crew were ready to leave the Montebello Islands and return home. We stayed in the protection of the bay for as long as we could with winds blowing a massive 30 knots as we departed. It was a slow trip back to Dampier but this crew had plenty of epic Montebello Islands fishing stories to relive and kept themselves occupied. 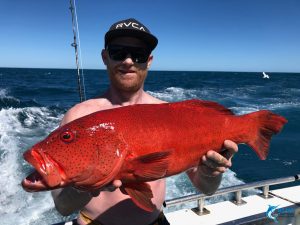 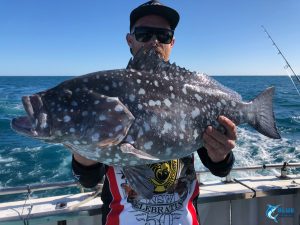 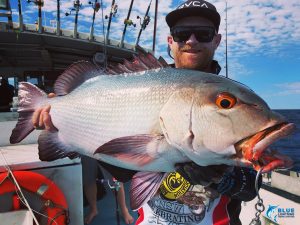 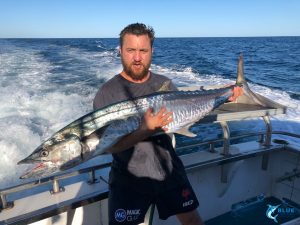 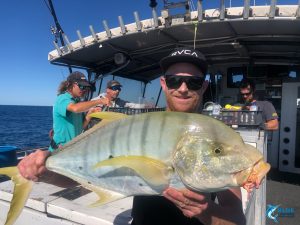