Fantastic fishing at the Montebello Islands WA05 August 2017Next

A Fishing Charter to Remember16 August 2017

As July drew to a close we headed out for our next exciting charter of the season. This time we had a group of individuals on board for a 5 day Montebello Islands fishing charter. The individuals travelled from far and wide with some from Melbourne, Adelaide and even New Zealand.  It was unique having 2 lots of 3 brothers on board, but a Montebello Islands fishing charter is a great opportunity for family bonding.

After the crew boarded on the evening before day 1 we got to know each other over dinner at the local pub, before heading back to Blue Lightning for a good night’s sleep. As day broke on day 1 we prepared to depart Dampier, in a very pleasant surprise a pod of dolphins came around to farewell us.

It was a windy day so we decided to troll our way around the Dampier Archipelago until the wind died down. Brian was first up catching his first ever Barracuda. Unfortunately, the trolling was proving to be a bit slow. I think the wind scared the fish away following the magical weather we had for the last 3 weeks.

As the hunger pangs began to get to us we decided to have a snack. It was a great idea, as soon as we began to eat we had a 3 way hook up. Tam landed his first ever Spanish Mackerel, while Greg got a Mack Tuna. We were happy to see a few big bait balls around the boat. Before long we had a double hook up with brothers Dave and Andy catching a Mack Tuna each.

Dave decided to try something different, setting up his hand line with a plastic, this could be interesting.

Making our way closer to the Montebello Islands we stopped for another trolling session. It wasn’t long before we had a 3 way hook up. Corey and Kris landed their first ever Spanish Mackerel unfortunately the 3rd was lost. As always it was awesome to be a part of the boys catching their first of a species, our day was made J  It wasn’t long before we had our next hook up, this time a 2 way hook up, but unfortunately we had a very hungry shark nearby.

It was time we continued along on our journey further West to the Montebello Islands. We decided to mix it up with a bottom fishing session and it was a hot session. Greg caught his personal best Red Emperor weighing in at around 8kg. Corey followed up with a Red Emperor of his own before Tam scored her 1st Red Emperor. We finished the session off with a great array of species including Red Emperor, Rankin Cod, Crimson Sea Perch, and Spangled Emperor.

It was a great start to the crew’s Montebello Islands fishing charter with a heap of great firsts including:

We had some very happy customers and the Blue Lightning crew were completely stoked to be a part of so many firsts in a sinlge day.

We woke on day 2 a bit of a breeze, 20kn NE easing off through out the day. Despite this we decided to make our way out to the outer reefs for a trolling session. Kris got himself a Shark Mackerel. Before we tried our hand at bottom fishing. The first bottom fish of the day was a Long Nose Emperor which we released to grow bigger. It was a fun little session with Tam and Toan scoring their first ever Golden Trevally. Dave caught his 1st ever Spanish Mackerel on a plastic, before Corey caught his first Crimson. Next up was Greg with a nice sized Coral Trout. We finished the session with Rankin Cod, Crimson, Coral Trout and with the guys catching and releasing Golden Trevally.

As we made our way back to the Blue Lightning Charters Pontoon known as the Cod Cave, we were surrounded by Whales everywhere. A whole family of whales swam past us, it was incredible for the guys to experience these majestic creatures so close to the boat. These islands provide us with constant surprises, even after all these years it is still simply breathtaking to see the marine life that call the Montebello Islands home. To end the second day we were treated to an amazing evening with the water calmed out to a milk pond.

Unfortunately, the calm of day 2 did not last, as we woke to a strong wind on day 3 of 28+ Knots S.  In between gusts, we made our way out for a day fishing around the islands. All the guys went around the islands casting and popping unfortunately they were not in luck. Even the GT’s were scared off by the wind. With all the white caps the poor GT’s couldn’t see the lures. The wind was on our side when it came to catching squid though with the boys getting a good number for us to create a delicious entrée. With the weather not really helping the fishing Captain Chad took the crew for a cruise around the beautiful Montebello Islands and up Willie Nilly lagoon. A few of the lads were keen to explore the history of the Montebello Islands and see the Nuclear Weapons testing site so Captain Chad dropped them off at Alpha Island to explore and experience the history for themselves. After a bit of exercise it was time to head back to the Cod Cave for a delicious lunch, to give the guys plenty of energy to enjoy the afternoon session.

After enjoying a delicious and big feed for lunch a couple of the guys made the mistake of getting comfortable at the Cod Cave. They did all manage to find a bit of energy to make their way out for the afternoon session. Some of the crew went for a snorkeling session, hoping to find some Crayfish for dinner. Once they were finished we decided it was definitely time for some fishing with the crew catching Coral Trout, Spanish Mackerel and Gold Spot Trevally. It was another fun little session with Brian landing his 1st Gold Spot Trevally and Greg reeling in his 1st Coral Trout trolling.

Woke to once again another windy morning, with winds of 25 knots ENE. Lucky for us we were expected the winds to finally calm in the afternoon, Captain Chad made the call that we would head out for a fish once the wind subsided. It’s always a difficult call for a Captain to make but often the fish simply don’t bite in these conditions anyway. Captain Chad took the guys to the beach for the morning giving the guys the opportunity to go swimming, walking, exploring the rocks and try their hand at some island fishing. Brian remarked that “it was a good adventure”

Lunch at the Blue Lightning Pontoon

The guys headed back to Cod Cave for lunch and a bit of a relax, hoping  to find the energy for the big fishing session we had ahead of us. Many of our customers find the Cod Cave and the Montebello Islands in general to be the perfect spot to relax and unwind surrounded by a serenity that is hard to describe.

As the afternoon hit the wind finally subsided and it was time to head out wide for some great Montebello Islands fishing. What a good fishing session it was! The crew caught a spectacular array of species including Spangled Emperor, Maroon Sea Perch, Coral Trout, Rankin Cod, Chinaman, Crimson Sea Perch and Robinson Sea Bream. It was great that the Montebello Islands decided to showcase just how awesome they can be. It was another session filled with firsts to put a smile on both Chad & my faces including:

Day 5 was upon us already and with it the last day of  this charter. We were disappointed that it was yet another windy day with 25+ knot ENE winds subsiding in the afternoon. We woke and had breakfast before packing up the Cod Dave. As we left the mooring we made our way out to do some trolling patiently waiting for the wind to go away. It was a fun little trolling session with Brian landing a Long Tail Tuna and Tam a Shark Mackerel. Before we had a two way hook up on our hands. Greg and landing themselves a Shark Mackerel each. Next up was Brian reeling in his first ever Spanish Mackerel. Before Tam landed a Long Tail Tuna. Everyone added to their tally landing themselves a Shark Mackerel in this session.

We continued exploring the islands with Captain Chad showing the crew the incredible scenery that make the Montebello Islands so extra special to us. We enjoyed lunch with an awesome view while waiting for the wind to subside before our return to Dampier.  The opportunity arose to cast for GT’s but unfortunately the boys didn’t have much luck due to dirty water from the winds.

We steamed on making our way back to the mainland. Captain Chad decided to go to a Mackerel fishing spot in the hope of landing the boys a couple more last minute fish. Within a few minutes of trolling we were on. Unfortunately, the Mackerel got lost, however Dave did manage to land himself a Mackerel to close out the charter just as the sun was going down. We made our way back in to Dampier a little later than normal arriving back in at about 8pm due to the wind.

It was a challenging week at the Montebello Islands with crazy winds, however we are fortunate to have the extra vessels to use around the islands. Despite the wind there were still good sessions of fishing, and this crew had a long list of firsts, which is always very special. The species up here at the Montebello Islands are some of the most beautiful and unique in the world and we simply love them. 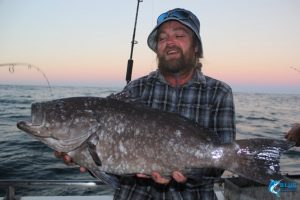 Kris with a Rankin Cod 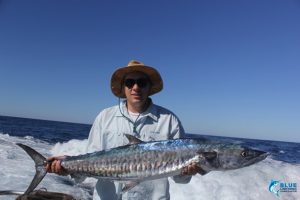 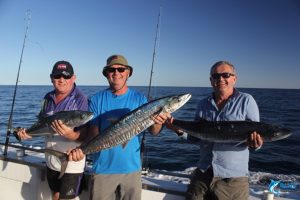 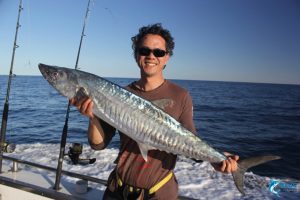 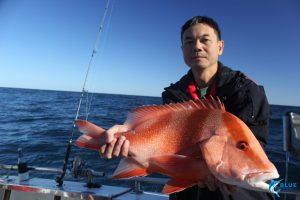 Tam with a Red Emperor caught at the Montebello Islands 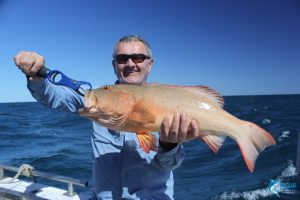 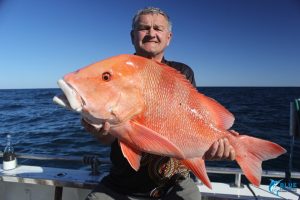 Greg with his personal best Red Emperor weighing in at 8kg 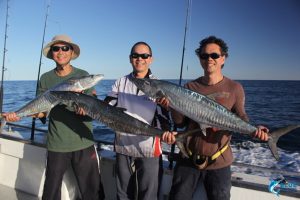 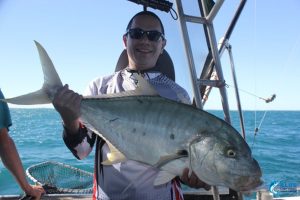 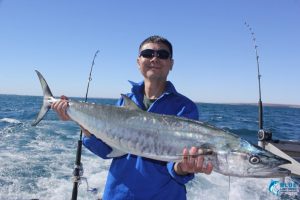 Tam with a Spanish Mackerel caught at the Monties 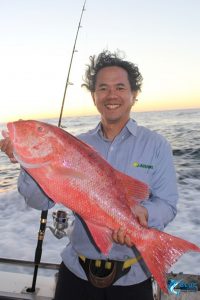 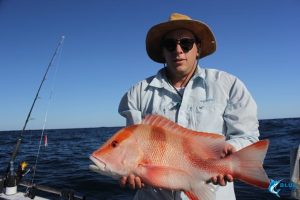 Corey with a sweet Red Emperor 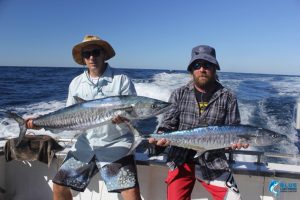 Corey and Kris with a Spanish Mackerel each 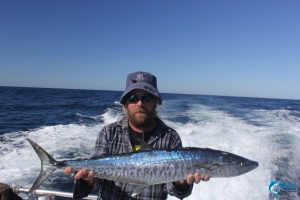 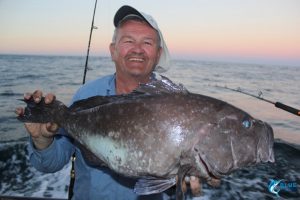 Greg with a Rankin Cod caught at the Montebello Islands 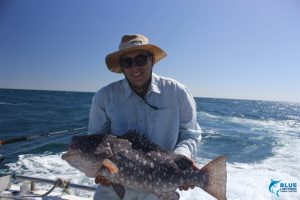 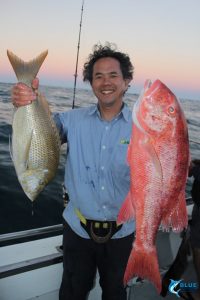 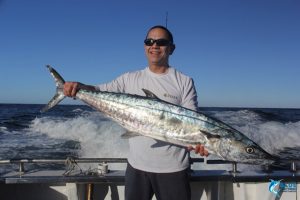 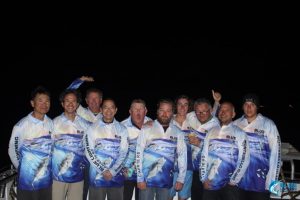 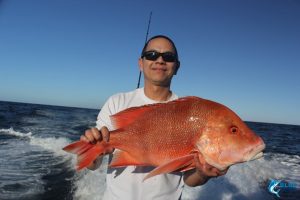 Toan with a Red Emperor