An Abrolhos Islands Birthday Celebration19 May 2017Next

This week we had a three day Abrolhos Islands fishing charter organised by Goff. This trip was an opportunity for Goff to take out some of his employees to celebrate their loyalty. A few of them have been out to the Montebello Islands with us, but none had ever visited the Abrolhos Islands. We were in for a great charter showcasing everything great about Abrolhos Islands WA fishing.

Day 1 started with Captain Chad giving his safety speech and explaining where everything is on the vessel. He was about to say if you feel sick direct yourself…. but before he could say anymore we already had a lad spewing over the side. We hadn’t even left the marina yet!!! It was going to be long day for him, as the wind was blowing 20kn WSW.

Trolling to the Abrolhos Islands

The boys were feeling a little hung over and sea sick and definitely needed to be entertained, and they weren’t disappointed. The next thing we knew all the lines went peeling off and we had a 3 way hook up. The boys all landed their School Mackerel and got their blood pumping in the process. The Mackerel were absolutely on fire ?with more double and triple hook ups of Spanish Mackerel. The mackerel were very hungry, and it made for a great start to this week’s Abrolhos Islands fishing charter. The excitement of this session wasn’t over yet though. While we were trolling for Mackerel, a Coral Trout decided he was hungry too, Daz was the lucky one bringing the coral Trout in and landing a massive smile on his face in celebration. We had lots of firsts on this hot session of Mackerel, with Carlos, Zac, Andy all catching their first ever Spanish Mackerel each. Goff got his first Stripe Tuna and Owen got his first ever Yellow Fin Tuna.

It was time to change fishing over to bottom fishing and show these boys the awesome variety of fish the Abrolhos Islands have on offer. The guys decided to run a bet and all put money in a kitty, with the winner being the person who caught the biggest Dhu Fish. The winner was decided to be the person with the largest Dhu Fish by length.

Before long Zac’s Rod started bending over, he brought up the first Dhu Fish for the trip. Not to be out done Daz brought up a Dhu Fishof his own shortly after, with his catch slightly longer that money is glistening at him. BUT there was still time for the other boys to catch something larger so he will just have to wait and see…

Red Emperor at the Abrolhos Islands?

Once again on this charter we saw a couple of Red Emperor. We are seeing more Red Emperor, which were traditionally a northern species  in this area further south on the WA coastline. A few of the Red Emperor we spotted were too small, and were released to grow bigger and stronger. Nathan jagged himself a nice Red Emperor which was an awesome surprise for him. We finished the bottom session with a variety of Red Emperor, Dhu Fish and Red Throat. To end the first day of charter we dropped some pots in to get some Crays. You could say some of the guys were very happy to be on the mooring ?

When we woke on day 2 we were greeted by much a nicer day on the water. We pulled in the pots and were slightly disappointed to find only one Cray Fish. It was time to head out for the day and see what these awesome Abrolhos Islands were going to offer today!

First stop was a bottom bouncing session with everyone still keen to catch themselves a Dhu Fish in the hope of winning the money. Nathan was stoked when a Dhu Fish came to the surface, unfortunately it was not in the running for the money just yet, maybe next time Nathan. Daz once again was on fire today catching his first ever Baldchin Groper. The Abrolhos Islands were proving to be lucky for Daz. Next he caught himself his first ever Samson Fish. Goff used his new plastic from Abrolhos Tackle and was excited to finally reel in a nice size Dhu Fish. But…was it long enough??? Yes! It took the title for the money so far. Don’t worry boys at least you have the rest of the day and tomorrow to knock him off the top of the leaderboard.

It was also a good session for Zac who caught his first ever Pink Snapper. All these firsts were keeping the Blue Lightning crew’s spirits up, as sharing species firsts with customers is the absolute highlight of our work! Next it was Ray’s turn to catch his first ever Spangled Emperor. Not to be outdone Andy caught his first ever Baldchin Groper. Before long Nathan reeled in another Dhu Fish, but still not big enough to take the title for the money.

We finished the day with an array of fish including Dhu Fish, Spangled Emperor, Baldchin Groper, Red Throat and Pink Snapper. Once again we dropped the Crayfish pots hoping we were going to get more lucky this time. Unfortunately it wasn’t to be on this charter. We stayed the night on the jetty at Big Pigeon Island. The guys got have a good chat with Spags on the Island. He shared lots of information and plenty of stories as he has been around the Abrolhos Islands for many many years Cray Fishing.

After a big cooked breaky we kicked off day 3, it was time to head off for a final day at the Abrolhos Islands. We started the morning session with fishing in the shallows. The shallow water fishing was a bit quiet with the boys only getting a few small fish that needed to be released to grow bigger. It was time to make our way further out into the deeper water to try our luck.

Daz was pretty stoked to see the right colour coming up. Yes, it was a Dhu Fish it was time to challenge Goff and see if Daz’s Dhu Fish was going to beat Goff’s in terms of length. Was it big enough??? Unfortunately not, it was just short. We finished this bottom fishing session off with species including Baldchin Groper, Dhu Fish and Red Throat. Unfortunately our three days at the Abrolhos Islands with Goff and the crew was coming to an end and it was time to make our way back to mainland.

This charter was filled with lots of firsts, which we love to see. The Abrolhos Islands showed this crew just what they are made of with stunning landscapes and seascapes, some spectacular fishing and some beautiful people. There really is no place quite like the breathtaking Abrolhos Islands.

For more information on one of our incredible WA Fishing Charters to the Abrolhos Islands check out our Abrolhos Islands destination page here or contact us at info@bluelightningfishingcharters.com.au 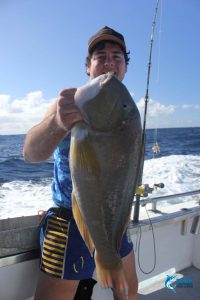 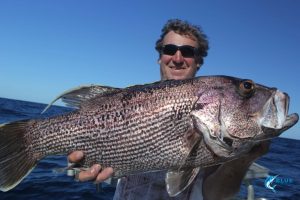 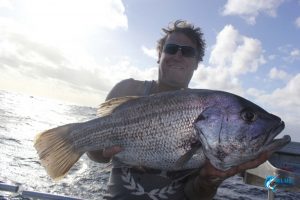 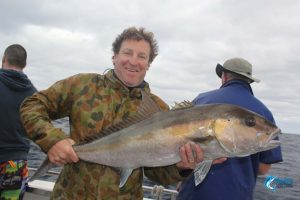 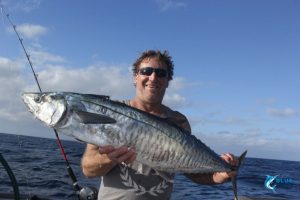 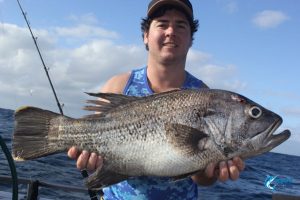 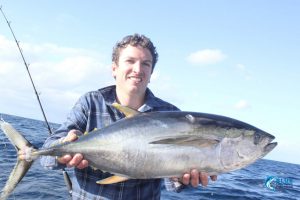 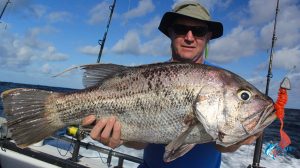 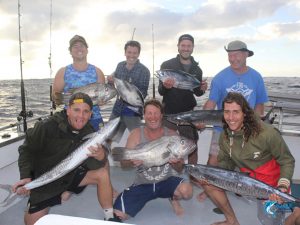 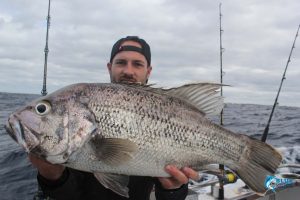 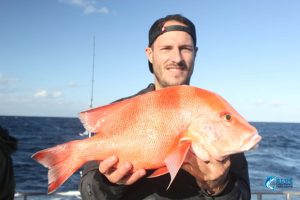 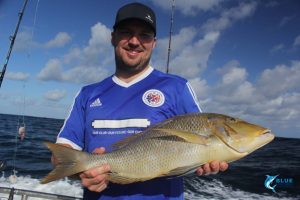 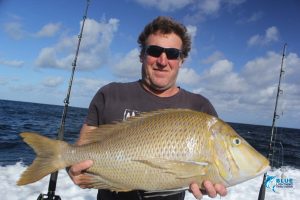