This was a long awaited trip which took 2 years to organise. The trip was organized for this group of 8 guys, and booked in well over a year ago. The boys have have been counting down ever since.

Finally the day came with the group arriving in Karratha with its long awaited warmer weather (well they think its warm and we think its cold. I guess that’s what happens when you come from Victoria).

Day 1- Set off for the Montebello Islands

Andrew the Birthday boy caught a Spanish Mackerel, Cobia, and a Shark Mackerel as we made our way to the islands. Ben got the first and biggest Spanish mackerel of the trip, at least he says so. Meanwhile Mark managed to bag himself a Golden Trevally and Stuart and Sam caught a Spanish mackerel each.  Unfortunately for poor John he didn’t managed to catch a fish but a nice wave over the back certainly caught him off guard getting him pretty wet.

Arriving at the “Cod Cave” our Montebello Islands pontoon

Chad and I were super excited to show off the pontoon to this group as Stuart, Jason and Andrew had been on a Blue Lightning Charter prior to the pontoon being set up. They love the new setup and we greeted by our friendly Montebello Islands “Pet” Kodak.

We kicked off day 2 with some bottom fishing and while it was a bit quiet the guys still managed to catch a variety of Spangled Emperor, Robinson Sea Bream, Rankin Cod, Chinaman & Maroon. John managed to break is drought by catching some good bottom fish. The remainder of the day was spent trolling with the guys catching nice size Spanish Mackerel and Mark landing a Giant Trevally.

Day 3- Trolling and fishing the Shallows

Day 3 was a very windy day. We mixed the day up by trolling deep which resulted in a mix of Spanish Mackerel, Long Tail Tuna and Shark Mackerel. Matt and Mark landed their Long Tailed Tuna on a couple of X Rap Magnum 30 Gold Red Heads.

We started day 4 off with a Bottom Bouncing session. The guys caught a mixed bag including Red Emperor, Spangled Emperor, Rankin Cod, Long Nose Emperor and Coral Trout. It’s always exciting at the Montebello Islands with such an unbelievable number of species calling these islands home you never know what will be caught next.

We finished the afternoon off with some trolling. The guys caught plenty of Spanish Mackerel and Shark Mackerel some of which were caught and released to ensure the health of the marine eco systems well into the future.

The guys really wanted to get some squid in the afternoon so once arrived back in the afternoon, we took them ashore to Alpha Islands on Heart Starter to try their luck. Our decky for the week (Chad’s Cousin) Ashleigh decided she would take the lead and took the guys for a huge hike over the islands. Eventually arriving at a nice beach for a few casts of squid. Unfortunately, they came back with no squid but they did enjoy their big hike.

We kicked off the day with some Shallow Water fishing which produced a good number of Spangled Emperor and Red Throats. During a Trolling session Andrew caught a Coral Trout on X Rap Magnum Gold Red Head. The guys also caught Spanish Mackerel while on the troll.

Soon we decided on a Bottom Bouncing session. This produced a good array of fish including some Stripey Sea Perch, Spangled Emperor, Coral Trout, Red Emperor, Crimson Sea Perch, and Scarlet Sea Perch. The guys wanted to try their luck again for some squid. Brendan took the opportunity to showcase his favourite spot for squid. Much to everyone’s disappointment Brendan had no more luck than Ashleigh and they returned with no squid. This made some of the guys glad they had stayed at the pontoon for a spot of golf J

Day 6 – The History of the Montebello Islands

Day 6 was a very windy day, providing a perfect day to explore and be around the islands. We started the morning off landing on the beach on Alpha Island. The guys began casting for squid. On their first cast they managed to get one before a turtle came and scared off the others that were around. We then made our way over the island past the weapons testing site, and to a beach over the other side. After a spot of fishing there Heart Starter came to pick us up and take us to Trimouille Island.

We took the guys to see the left over gensets from the nuclear weapons testing. We went for a big hike from the gensets to the cliffs over the other side of the island. Before making our way back around to the beach and then showing the guys the testing site on Trimouille Island. Captain Chad knew the guys would be thirsty after their time exploring and left the drinks esky on the beach for them to have a nice refreshment after a big hike.

By this time we were all a little hungry, so we all made our way back to the “Cod Cave” (Blue Lightning Charters’ Pontoon) for a well-deserved lunch. After lunch most of the guys wanted to go for a snorkel, while 3 fished out of Heart Starter. Chad went snorkeling and managed to get a couple of cray fish, which made a great entrée of pop corn cray fish YUM YUM. A few of the guys mentioned that the snorkeling, was their highlight of the trip. As the evening rolled in we had a visit from a very good size hammer head shark at the “Cod Cave” which was exciting for us all.

Day 7 marked last day of this charter, as always we fished our way back to Dampier. We tried our luck at trolling for Bill Fish but unfortunately they were not hungry.  The trolling did however produce good sized Spanish Mackerel, Shark Mackerel and Yellow Fin Tuna. Sadly, all good things must come to an end and this 7 day charter has finished. It was another awesome week at the Montebello Islands despite some unusual weather and we cannot wait to welcome this awesome group back on board next time.

Until next time… Happy fishing 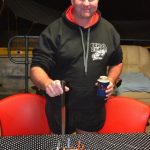 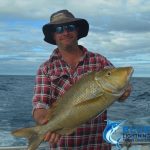 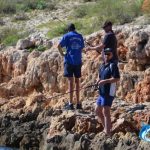 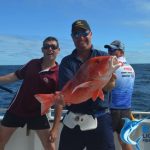 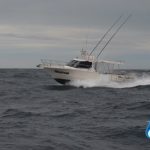 Huntress over taking Blue Lightning III at the Montebello Islands 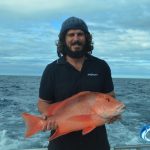 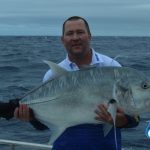 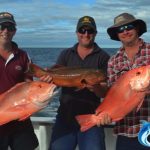 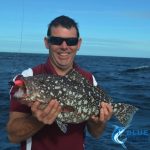 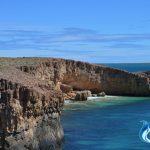 The scenery at the Montebello Islands is amazing 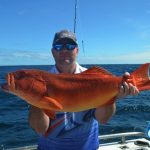 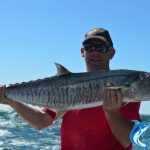 Stuart with a Spanish Mackerel 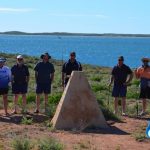 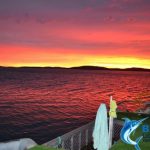 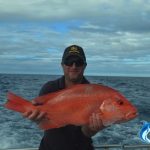 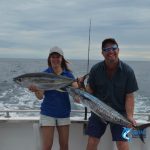 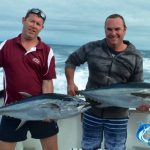 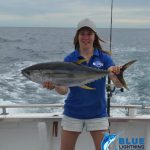 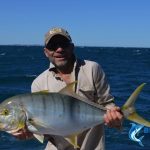 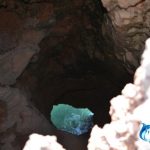 A blow whole on the cliffs at the Montebello Islands 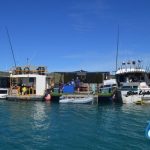 Home Sweet Home at the Montebello Islands “The Cod Cave” 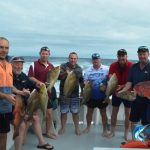 The whole group together 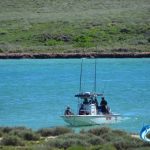 Heart Starter doing a drop off at the islands 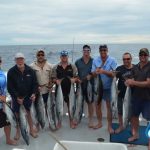 The boys with some Mackerel & Yellowfin Tuna 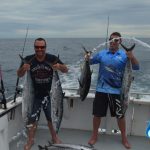 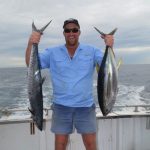 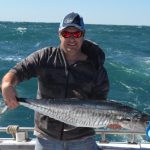 Jason with a Spanish Mackerel 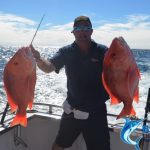 Ben with a couple of Red Emperor