Welcome back to the Montebello Islands WA

Welcome back to the Montebello Islands WA

This week marked the beginning of Blue Lightning Charters 2016 Montebello Islands WA fishing charter season. We absolutely love this time of year with the promise of a fishing paradise. The Montebello Islands have so much to offer us with plenty of billfish, GT, and a mixed bag of bottom fish often being the highlights of our Montebello Charters. But that’s just the fishing, the scenery up here is simply breathtaking and the history of these islands has us in awe. This week though we had a group of guys on board from Canberra for their third trip with Blue Lightning Charters.

Day 1- Dampier to the Montebello Islands

As we were about to leave Dampier Spiros realised he didn’t have any thongs to wear on the boat. Lucky for him the servo up the road was open and had a supply of thongs. The others waited on board Blue Lightning III in anticipation to start their fishing trip. Before long Spiros’ thong situation was sorted and we began to make our way to the Montebello Islands; fishing along the way. John caught the very first fish of the Blue Lightning Montebello Islands WA fishing season, a good sized Spanish Mackerel on a Halco Laser 190 Qantas. We had a few turns at bottom fishing with John again managing a nice fish, a coral trout on 7 inch white K/man White plastic and a nice size Rankin Cod.

After some success with the bottom bouncing we decided it was time to troll for some Mackerel. They were certainly on the bite with Michael G, Con and Pat each getting a Spanish Mackerel. Spiros managed to get 3 Spanish Mackerel on red and white Halco lures. There were triple and quadruple hook-ups of Spanish Mackerel, Mack Tuna, and Shark Mackerel.

Soon Spiros caught a nice sized GT on a Halco mirror blue and silver. While Arthur managed his own GT with a little help from decky Jake. The GT’s were all in the 20-25kg range. Unfortunately for us the sharks decided they were hungry too so it become a race for the boys to get the fish to the boat before they were eaten. While the sharks did get a few, we got to see a few Mackerel fly through the air as the dodged the shark’s jaws.

We decided it was now time to call it a day and headed to the Blue Lightning pontoon where we were greeted by our good friends Kodak and Fuji the Queensland Groupers. We had a delicious (and very big) feed of Souvlaki thanks to Spiros (I think I will put on 5kg by the end of this trip with all this delicious food). We then spent some time gazing at the incredible full moon and the beauty that is the Montebello Islands.

At 3am we woke to the sound of rain, by 5am it had gotten quite heavy and a couple of the boys who were sleeping on the deck were a little soggy….whoops. We started the second day of this charter with a session trolling for Mackerel. It was a successful session with the boys catching plenty of Tuna, Spanish Mackerel, Shark Mackerel and some GTs. John’s nice Spanish Mackerel was caught on a Gold Laser Pro 190.

We decided the afternoon would be well spent bottom bouncing. Con got 2 nice Red Emperor, while Pat and Mick got one Red Emperor each. The boys finished day 2 with a mixed bag of Coral Trout, Red Emperor, Chinaman and Robinson Sea Brim.

By the end of the day all the boys ended up wet as it rained consistently throughout the day, which is very unusual for this time of year at the Monties, but hey we need the rain and the fish were still biting so it’s hard to complain.

The boys started day 3 with some bottom fishing. They managed to catch quite a few Trevally before releasing them back into the ocean. Pat also caught a nice Cobia. The boys ended this bottom fishing session with nice feed of Rankin Cod, Coral Trout, Red Emperor, Scarlet Sea Perch, Long Nose Emperor and Spangled Emperor. Jake landed a Scarlet Sea Perch on Spiros’ rod while he was having lunch.

For the afternoon session we decided to do a little trolling and boy was it fun. Con, Michael, Chris and Mick all caught a GT each. With plenty of Shark Mackerel, and Mack Tuna, also on the bite.

Again we were lucky enough to have Kodak and Fuji visit the pontoon on day 3. They must have missed us over the off season because they have been at the pontoon at the end of each day so far. Chris and Brendan threw in a line from the pontoon and managed to catch us some squid for dinner.

We woke on day 4 to another miserable day, which left us wondering where our beautiful Northern WA weather has disappeared to. We were yet to see a blue sky and it had been raining heavily through the night. We were pleasantly surprised to find Chris had been awake since 5am catching squid (which made us all look forward to dinner even at this early hour).

When we got fishing day 4 proved fruitful with a great variety of fish. Michael was quite unlucky with a big tangle and losing a fish and his rod and reel to a shark. Soon though Paul felt something on his line so brought it up, lucky for Michael it was his line tangled up with Paul’s. We managed to retrieve his rod and reel in 45 meters of water. We told Michael it was time to buy a lotto ticket as soon as he hit land again, as it was his lucky day.

Day 5 marked the final day of this charter and it was time to travel back in to Dampier. We trolled on the way and the boys managed to bag some Mackerel and Tuna to top off the trip.

It was a great trip to start our 6 month fishing charter season here at the incredible Montebello Islands. The water temp was a stable 26.7 degrees making the water a super inviting place to be.

Until next time, happy fishing. 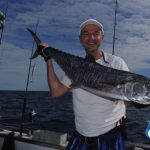 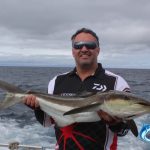 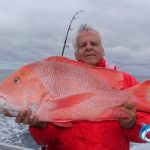 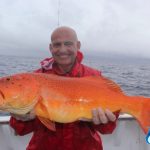 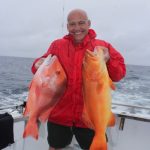 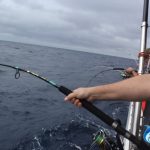 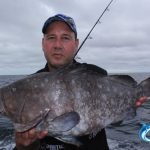 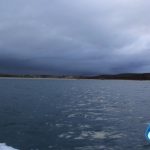 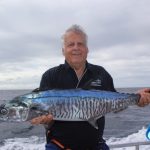 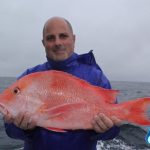 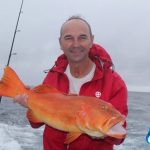 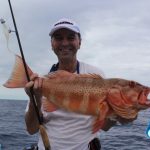 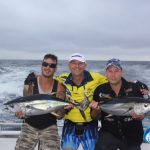 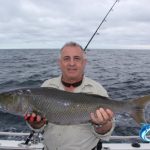 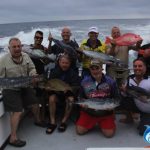 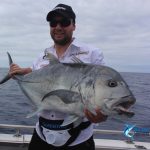 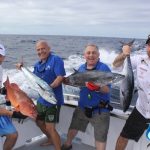 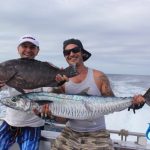 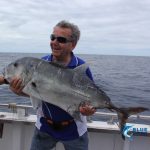 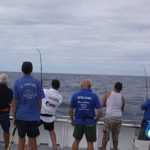 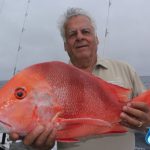 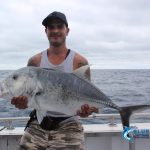 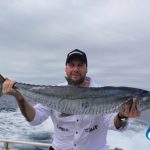