Abrolhos Islands, Farewell (until next time).18 June 2016Next

The Blue Lightning team welcomed us on board the night before our charter began. This gave us the opportunity to throw the ropes as soon as the conditions were optimal.

Following some light entertainment by our skipper, resident plumber & deckie we were ready to depart Geraldton Marina around 2am in an effort to stay ahead of the cold front that was due to set in.

Dawn found us just south of Kalbarri, later that day the Zuytdorp cliffs displayed their majesty. The day was overcast & the front continued to nip at our heels as we steamed on at a steady 11 knots. We passed between Steep Point & Dirk Hartog Island just prior to dusk under the watchful eye of the ever present fishermen making the most of the late afternoon feeding time from the cliffs. Our path was lit to the left by the prawn trawling fleet, providing a spectacular scene. As we entered the sheltered waters the crew sat down to dinner.

We arrived at Carnarvon around 1am for refuelling & departed with full tanks & an extra bladder around 3am. We put out a spread around 4pm. Before we knew it the long rigger with the Pakula black soft head had a strike. Pete D took up the 37kg standup & reeled in the first bill fish for the trip and his first marlin, a blue weighing approx. 120kg. This was soon followed by a second strike on the short rigger but with no conversion. As the sun began to set we experienced another strike on the long rigger. This time it was BrendOn who took up the 37kg stand-up and pulled his first marlin, a little black around 50kg. Once again the Pakula black soft head proving its worth.

First Marlin for the trip

With the crew enthused to get some more runs on the board, the evening was spent deep dropping around 400-450m. Justin casually mentioned he felt he might have something on his electric reel. The poor fellow began to suffer cramps in his fingers as his body struggled with the rigours of operating an electric reel whilst alternating between drinking a beer & warming his hand in his pocket. A brow wipe was necessary as the valiant fisherman fought on. The result was a stonker of an 8 Bar Grouper weighing in at 32kg. It’s size was only eclipsed by the grin on Krusty’s face!!  This was soon followed by a 20kg Dogfish, a couple of bust offs, 2 or 3 sharks and an arrow squid. The Dogfish went on to star in several future meals. The same can’t be said for the Arrowhead.

Chad & Pete fished the surface to 30m for Swords. The result, Chad lost his favourite squid. Pete lost around 400m of braid but there were no complaints as everyone retired to their bunks satisfied by the night’s entertainment. Justin retired with a Cheshire Cat-sized grin and no hint of his earlier finger cramps!  We all slept soundly on the waters off Tantabiddi.

What a way to wake up! Tantabiddi looked like it’s usual spectacular self. The only disturbance came from the constant hum of outboards as keen fishermen departed the Tantabiddi boat ramp allowing Paul the opportunity to enjoy watching his ever reliable Stabicraft boats being put to good use off our West Coast.

As we departed Tantabiddi & headed towards the rigs we hooked our first Marlin for the day on the short rigger, our third for the trip and my first blue, weighing around 160kgs, once again on the Pakula black soft head of the previous day’s conversions. It released showing the splendour of colour it was raised with.

We kept trolling with a few more strikes and a double header of small blacks. Chad hooked one whilst switch baiting as Brendan began reeling one in on his Stella but neither fish stayed connected.

A few of the crew took the opportunity to have a nap. With a quick pull of the line however, the subsequent sweet sound of a ratchet going off and more than a few enthusiastic whoops we soon had the sleeping beauties jumping back on deck.

Arriving at the Montebello Islands

Around midnight we passed Barrow Island and arrived at the entrance to the Montebello Islands. Chad expertly manoeuvred his way through the channels and into Chartreuse Bay to be greeted by the lights of several moored yachts & ‘Kodak’ the resident monster Queensland Groper.

Johnny began the morning with an eye full of orange juice. Meanwhile, Chad opened the hatches and sent Pete D down to investigate the inner bowels of the pontoon where the summer months had brewed a nice mix of stagnant water. After a few garbled messages and possible pleas for help, Pete D resurfaced red-faced and gasping for air. With full empathy for his crew, Chad ordered Pete D back down to clear the contents & ordered BrandOn to be ready. Should Pete pass out, he was the next to be sacrificed. This ensured the rest of us soon made ourselves busy to avoid receiving the same fate.

BrandAn used what he deemed as his management skills to ‘point’ directions to the surface crew. BrendOn & Pete B carried out some impressive monkey manoeuvres across the centre beam & all of us were armed at some stage with a paintbrush as we hit every metal surface, & each other, with Hammertone blue.

Our skipper took us on a tour of Hermite Island & Willy Nilly Lagoon before entering Vodka Bay where we carried out the customary toast with one of  Johnny’s spectacular cocktails. Our skipper expertly nosed Blue Lightning up to the island allowing us to alight in the crystal clear waters. As we wandered the island we were in awe of it’s history, it’s covering of rusted particles & its beauty all at once.

The fish were biting as we returned to Chartreuse Bay. Whilst Johnny performed the kindly act of diving on our yachtie neighbour Don’s anchor. The crew tried out some interesting techniques on the  Blue Lightning golf range.

Don joined us for dinner that evening, finding himself surrounded by laughter, good humour, food and an assortment of wine & spirits. He eventually returned to the sanctity of his yacht, albeit via a rather wonky canoe trip, & the peace of solo sailing.

The crew began the day with a range of pontoon activities which included fishing, reading, relaxing & soaking up a little sunshine before gathering up rods and an assortment of lures, soft plastics, jigs etc & climbing into the rib headed for Alpha Island. We had blue skies, a good tidal flow & more than ample enthusiasm but the fish weren’t playing ball.  A few of us couldn’t resist the lure of what lie over the next hill so we climbed the track used by a myriad of marsupials & our jaws dropped as we saw the vista before us. We cast our way around the cliff faces and bays.

Eventually we arrived at a sandy beach. It was lined with mangrove trees, the edge of the tidal flow and rocky outcrops from which to cast. BrendAn reeled in a Spangled Emperor just as we heard the dulcet tones of the Yamaha 15hp coming around the corner. Our esteemed Skipper & Pete D arrived with ice cold beers & a lunch of fish, squid & spring rolls. We bid farewell to our perfect little bay and continued to circumnavigate Alpha Island with the guys taking turns to cast from the rib and troll some superb rocky outcrops & reef.

The wind remained against us going wide in the hunt for billies so we headed to Trimouille Island for a look around & a spot more fishing. Chad directed us towards the remains of the old jeep and a few of us headed off to investigate.

Amongst various relics of Australia’s largest nuclear testing, we were stunned to find sizeable chunks of metal pounded by the detonation and sent flying from HMS Plym which had been moored some 400 yards offshore.

Ice Cold refreshments in the bay

Upon our return to the shore our Skipper again exhibited impeccable timing, delivering ice cold refreshments to the bay before us.

The rest of the crew had experienced overwhelming success in their squiding efforts & as the sun set again, we happily prepped the squid off the backboard of Blue Lightning until out of the murky depths of the black squid ink Pete D appeared with a roar that that sent several crew members scurrying.

Our final full day at the Monties saw the wind again too strong to go wide for billfish so the guys hit the Blue Lightning golf range. Johnny delivered a nice shot that won him the longest drive of the day. Final inspections & maintenance of the pontoon were completed with BrendAn again utilising his masterful pointing skills. Justin took to the water & I think it’s safe to say he was impressed by the spectacle of the underwater habitat. That night evolved into a Masterchef cook off, Justin & Johnny NOT using Justin’s secret 3 ingredient batter recipe but making the most exquisite entree of squid; BrendAn, BrendOn & I turning out the best hamburgers West of Trimouille Island and the Skipper & Pete D eclipsing us all with fried rice stuffed squid cones. (For the record the  hamburgers won the cook-off no matter what the skipper says.)

I found it difficult to sleep having severely overeaten (Too much Squid hey Audi?). I decided to head to the pontoon where I found a comfy spot on the stargazing deck. I laid back to admire the crystal clear Milkyway above. As I lay there, I couldn’t help but thank the stars above for the tremendous Blue Lightning team, the awesome crew & the once in a lifetime adventure I’d had the privilege to be a part of.

Well the trip home proved more than just a little eventful. The spread was out, the crew were poised for action. I, however, thought I’d have a little doze and as I drifted off to the not so gentle rise and fall of a decent swell & conflicting wind I heard the yahoos kick off as we reached the mackerel ground. From then on the fun began. There was heaps of whooping and laughter as the guys landed a range of fish. If things quietened off you’d hear the Skipper announce it was time to move to the next spot & before we knew it he was blowing his trusty horn to signify it was lines in and the fishing frenzy was on again.

BrendAn, who has a rather arsey way of predicting good fortune announced he’d like to finish the day with a sailfish on his Stella 30000…& he did!! It was the perfect finish to a superb trip. We arrived at Dampier to be greeted by the other stalwarts of the Blue Lightning team, Leah & Bill.

Our gratitude to Blue Lightning Charters even greater than before.

The Blue Lightning Team thank you for the great blog Audi. We are glad you enjoyed your trip with us. We look forward to having you aboard again soon.

Our Montebello Islands for 2016 is about to commence! We could not be happier to start the season and with our new additions, stay tuned to see what they are…

For more information on one of Blue Lightning’s incredible  fishing charter adventures check out our Montebello Islands destination page. 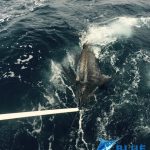 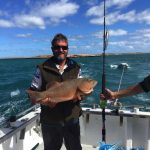 A Coral Trout from the trip from Geraldton to Dampier 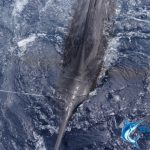 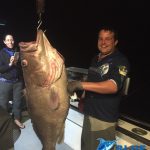 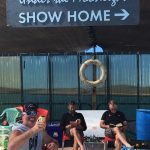 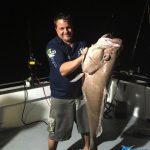 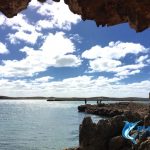 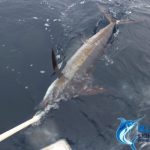 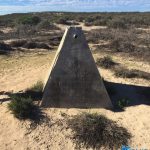 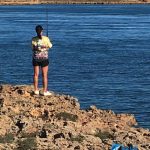 Audi enjoying a spot of fishing at the Montebello Islands

The Montebello Islands offer some incredible landscapes, fishing and history 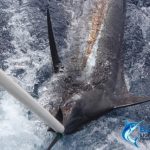 A Blue Marlin is always a welcome sight 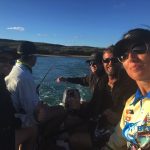 The crew enjoying the Montebello Islands 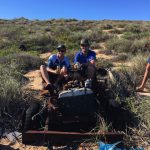 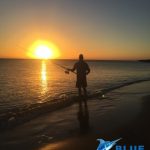 Life doesn’t get much better… 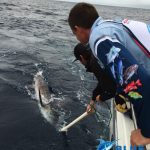 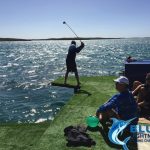 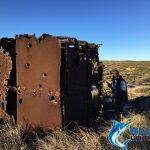 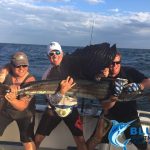 A Sailfish caught at the Montebello Islands WA fishing paradise 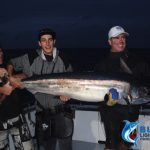 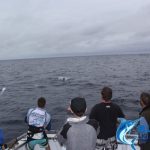 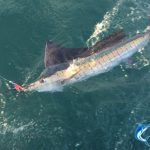 Brendan M caught this nice Sailfish on the trip